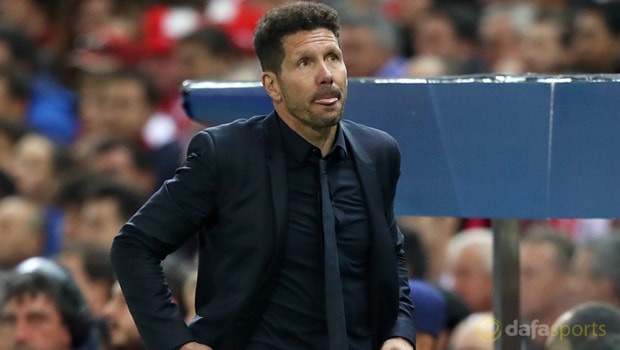 Despite yet another Champions League elimination at the hands of Real Madrid, Diego Simeone had nothing but praise for his Atletico Madrid side.

Trailing by three goals after the first leg in the Bernabeu, Atleti seemed to be facing mission impossible in the Vicente Calderon on Wednesday, as the stadium hosted its final European game.

Early goals from Saul Niguez and Antoine Griezmann brought the tie to life amid a raucous atmosphere in the old stadium.

There was genuine belief amongst the fans and players before Isco’s goal just before half-time effectively ended the tie, leaving the home side once more needing three goals to progress.

For Simeone, it was a proud night and one where his players had shown their total belief in what they were doing.

“Those first 30 minutes will be in the history of the stadium and the people,” he said.

“It was an extraordinary game and there was great quality on show from so many players in our team.

“We have to be proud of the players. They kept hope, showing we weren’t talking for the sake of talking, but because we believed.”

Atletico have lost two of the previous three Champions League finals to their city rivals while they also lost a quarter-final in 2014/15 at the hands of Real Madrid.

It has been a painful run in Europe, but Simeone insists it can be held up as a sign of the progress Atleti have made in recent seasons.

“It was a Champions League semi-final against a great opponent,” added Simeone.

“They made things difficult for us in their stadium, but our team demonstrated why we have been competing the way we have for so many years.

“We believed we could do it and we were close to winning the tie. We set the tie up well, but their goal hurt us a lot.”

Real Madrid are 1.80 to win the Champions League while their opponents in next month’s final in Cardiff, Juventus, are 2.00 to lift the cup.