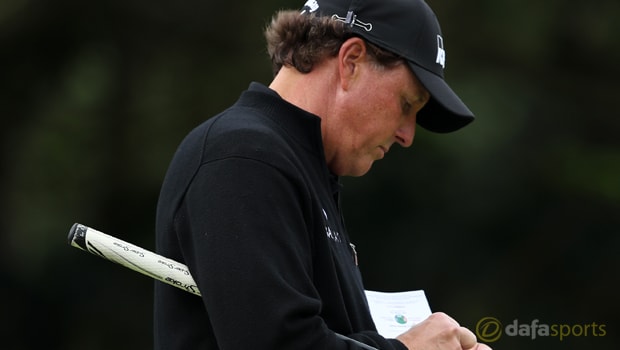 Phil Mickelson admits his goal over the next few months is to book his place in the United States’ Presidents Cup team.

Lefty heads into this week’s Greenbrier Classic without long-time caddy Jim MacKay following their recent split and is aiming for a move up the standings, with him currently sitting 40th in the FedEx Cup list.

At 47, Mickelson knows he is in the home straight of his career but age has by no means dimmed his ambition and he is keen to end his wait for a win, with his last triumph coming at the 2013 Open Championship.

Breaking his duck would undoubtedly boost his hopes of making the Presidents Cup, having played in every event since its introduction in 1994.

The 2017 event has special meaning for the five-time major champion, with him a member at the venue, Liberty National.

Mickelson admits he is desperate to make the biennial event, with this week at White Sulphur Springs the start of a big couple of months.

He said: “It is a big goal of mine to make it on that Presidents Cup team. I’m a member at Liberty National. I love the golf course.

“After having received a captain’s pick last time, I feel it’s important I make it on my own. I’ve got six events to make this team.

I’ve been working hard with my instructor to make be sure I’m swinging the way I need to.

“So I’ve got six good tournaments, and I am going to be putting everything I can into it to get on that team.”

Mickelson is 21.00 to win in West Virginia, with Patrick Reed leading the betting at 13.00.