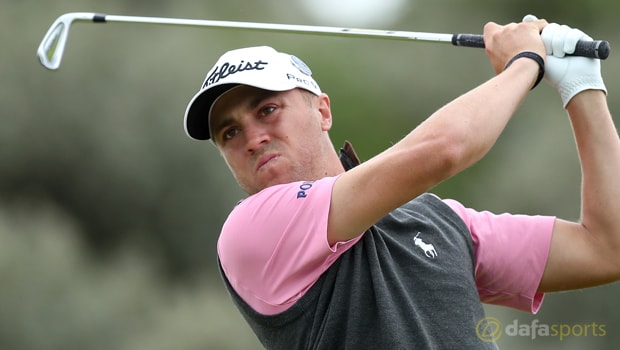 World number four Justin Thomas produced a scintillating performance on day one of the inaugural CJ Cup in South Korea to open up an early three shot lead.

Thomas, whose four victories in 2017 include a maiden US PGA Championship, looked hugely impressive at Nine Bridges Golf Club as he set an early marker for the rest of the field.

America’s number three, who is expected to be part of USA’s 2018 Ryder Cup team, made seven birdies, two eagles and two bogeys for a nine-under-par 63 and he has already opened up a three-stroke lead.

Thomas looks like he will be hard to catch if his day one form is anything to go by but there are a host of players that will be aiming to put the pressure on come the second round.

Americans Patrick Reed, Chez Reavie and Scott Brown, Malaysian Gavin Green and Australian Marc Leishman are in a five-way share of second on -6 after all five shot rounds of 66.

Tony Finau, Charles Howell III, Russell Henley and Ollie Schniederjans – who are all from the US – and Venezuelan Jhonattan Vegas are a further shot back on -5.

Former world number one Jason Day made eight birdies, two bogeys and double-bogey to sign for a four-under-par 68 and he heads a large group of players on -4.