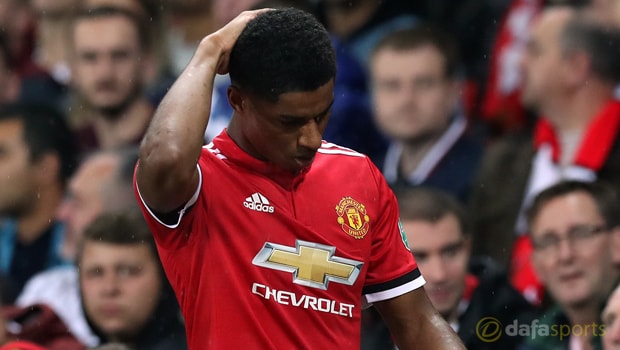 England international Rashford scored the only goal of the match at the Estadio da Luz as his delivery from a free-kick was bizarrely taken over the line by goalkeeper Mile Svilar, in what was a huge mistake from the 18-year-old shot-stopper.

However, Rashford was forced off on the 76th minute after complaining of a knee problem and he was replaced by Frenchman Anthony Martial.

The Red Devils now face a nervous wait to find out the extent of the injury and Mourinho admitted afterwards he had no idea the Englishman was hampered by the problem so much.

“But no, he told me he felt something in his knee. It didn’t look to me like a big thing but we don’t know.”

Rashford is now a doubt for United’s Premier League clash away at Huddersfield Town on Saturday and he is not the only player that could be missing from the squad.

Defender Eric Bailly and the midfield pair of Marouane Fellaini and Paul Pogba are all struggling with their respective injuries and Mourinho is unsure whether they will be fit to play.

“For Eric Bailly, I think it will be difficult,” he added.

United are 1.36 favourites to pick up all three points at the John Smith’s Stadium, a draw is priced at 4.75, while the Terriers are massive 10.00 outsiders.