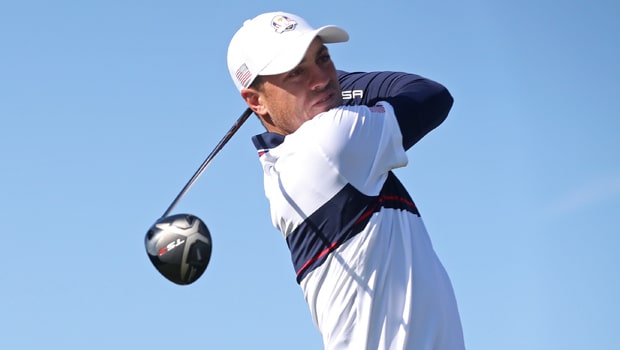 Justin Thomas hadn’t planned on teeing up at the RBC Canadian Open but the former world number one is determined to take advantage of his trip to Hamilton CC this week.

A wrist problem prevented the 26-year-old from playing the PGA Championship at Bethpage and he’s still a bit rusty, with next week’s US Open at Pebble Beach lurking.

He shot rounds of 71-80 last week at The Memorial Tournament, his only start since finishing T12th at the Masters in April, and quickly added his name to the entry list for Canada.

“My first-ever time to Canada, so I’m excited to be here,” the 2017 PGA Championship winner said.

“Obviously it was a late addition to the schedule. It wasn’t exactly in the plans, but I definitely need to get a few more reps going into the US Open.

“I was a little rusty last week from not playing for a while and was kind of making some stupid mistakes and stuff that I don’t usually do. I’m just trying to play my way out of that, and the more time you can get in competition, or the more time I can spend in it, I feel like the quicker I’ll get out of the rust.”

While he hasn’t played at Hamilton before, Thomas suggests the presence of Dustin Johnson, Brooks Koepka, Rory McIlroy and others tells him more than he needs to know about the layout and the event itself.

“I’m excited to be here and heard a lot of great things about the course. The fact that guys are willing to come and play the week before the US Open, as far away as it is from the US Open, I think speaks [volumes], and you know, kind of takes care of itself,” he added.

Thomas is 15.00 to win in Canada, with former champion Johnson favourite at 6.00 and recent PGA champ Koepka 7.50.