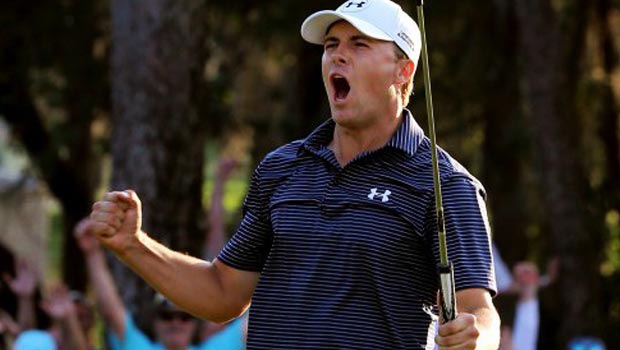 The 21-year-old had finished on 10 under par with his fellow Americans on the Copperhead course at Innisbrook Resort – one shot ahead of Sweden’s Henrik Stenson on his competition debut – but claimed the Florida trophy with a birdie on the third play-off hole.

The world number nine becomes the fourth player in the last 70 years to win two PGA Tour titles before the age of 22.

Victory for Spieth, who last year became the youngest runner-up of the Masters on his tournament debut, was all the more remarkable given that he saved par on his final three holes to get into the play-offs.

“I would rank those definitely in the top five I’ve ever had given the lies and the scenario,” Spieth said.
He then secured the win on the third extra hole by making a 28-foot birdie to follow up his victory at the John Deere Classic at TPC Deere Run in Illinois in 2013.

“That’s just luck,” he said, when asked about his winning putt. “Guess it was my day.”

Overnight leader Ryan Moore endured a final round of one over to forget with six bogies, eventually finishing in fifth behind the highest-placed European, Stenson.

England’s Brian Davis shot a final-round two-under 69 to finish on four under, in joint 10th position, while Lee Westwood (69) finished on three under with Ian Poulter (69) a further shot behind.

The USPGA Tour continues this week with the Arnold Palmer Invitational at Bay Hill GC & Lodge in Orlando, Florida.

Elsewhere, world number one Rory McIlroy is currently priced 5.76 against ‘The Field’ [quoted 1.14] in the Masters outright winner betting.