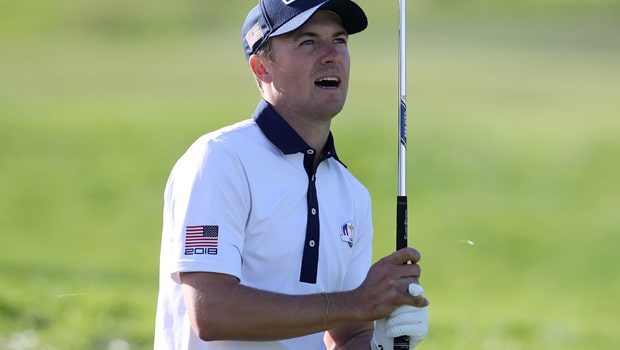 Jordan Spieth’s resurgence continued with a five-under par 65 at the Charlies Schwab Challenge in his home state of Texas, though he was still left pondering a poor tactical decision.

The multiple Major winner enjoyed a fine week at the PGA Championship in New York, finishing tied-third behind Brooks Koepka, and aims to build on that in an event he won in 2016.

He sits one stroke behind first-round leader Tony Finau (-6) but could easily have led the tournament having made eight birdies in round one.

Trying to force a low hook with a wedge from the fairway at the par-4 18th (his ninth hole of the day), Spieth found Crampton’s Lake left of the green on the way to a double-bogey.

Given that his putting was so strong – he made 153 feet worth of putts – he conceded afterwards it was the wrong play to go after a tight pin position.

“Considering I was 50 per-cent from 15 feet [putting], I may as well just keep giving myself 15 feet,” Spieth said.

“If it’s any other pin, I probably birdie the hole, and I just tried to get cute with that one.”

Despite a fine opening score, he hit just half of his fairways, and was 11 of 18 in greens in regulation, ensuring Spieth knows there is still plenty work to be done. He feels the percentages are going in the right direction.

“I still had some scar tissue on shots today where I’ve had some foul balls to the right this year where that’s been my miss,” he added.

“I played away from that shot because of the potential of what’s been there this year.

Spieth is 4.00 favourite to win the Charles Schwab Challenge, while early pacesetter Finau is 5.00.