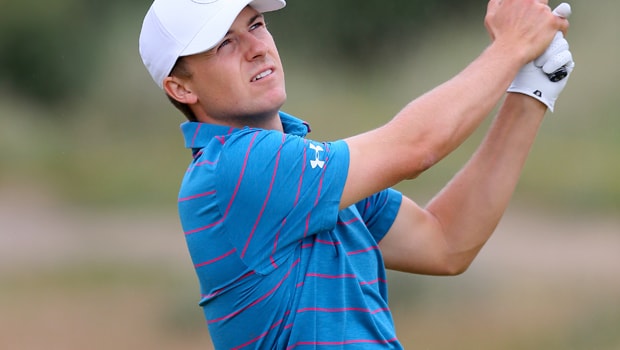 Jordan Spieth is relishing the opportunity to defend the Claret Jug in this week’s Open Championship at Carnoustie.

The American battled hard with compatriot Matt Kuchar 12 months ago during a thrilling final round at Royal Birkdale, before eventually producing a masterful finish to win by three shots.

That was Major championship win number three for Spieth and the 24-year-old is keen to defend it.

Spieth concedes that he’s expecting tough conditions in Scotland this week, something all of the field are prepared for at Carnoustie.

He told The Scotsman: “I’ve seen Opens at Carnoustie and why the golf course has a reputation and the nickname, ‘Car-nasty’ among the players for being so difficult.

“But I thoroughly enjoy links golf and The Open has always been one of my favourite events, so I am looking forward to the challenge I know Carnoustie presents, especially the finishing holes.”

Perhaps surprisingly, Spieth is without a win on Tour since his triumph at Birkdale last summer, while he recently missed the cut at the US Open – the first time he has failed to make the weekend at a Major since the 2014 USPGA Championship.

Despite growing up in Texas, he finds the challenge of links golf to be appealing, and Spieth expects ‘tough but fair’ to be the tale of the tape in Scotland.

“As a competitor, you look forward to that tough but fair type of challenge, knowing that you can expect a little bit of everything over four days in Scotland, in terms of the conditions,” he added.

“People are talking about score-to-par and that shouldn’t be important to us, as we are playing ourselves and the golf course – that’s what we’re focused on.”

Spieth is 17.00 to win the Open Championship this week, with world number one Dustin Johnson favourite at 12.00 and England’s Justin Rose priced at 15.00.