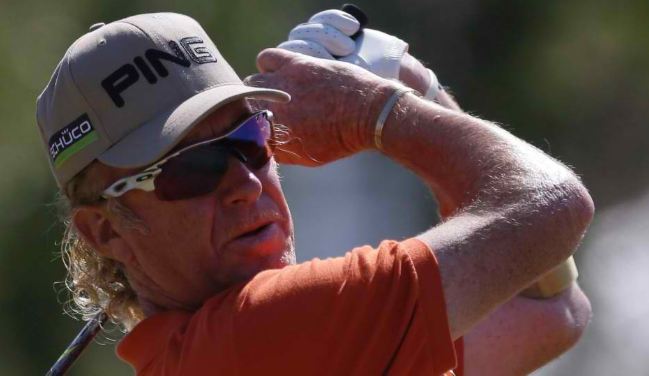 Miguel Angel Jimenez says he would love to become the oldest person to win a major after moving one shot clear at halfway stage of Open Championship.

The 49-year-old is atop the leaderboard after two rounds at Muirfield after a composed level-par 71 on Friday kept him on three-under.

The Spaniard carded a 68 in the first round and continues to show signs he is getting back to his best after a delayed start to the season due to a broken leg suffered while skiing in January.

The four-time Ryder Cup star will go into round three one shot clear of Tiger Woods, Henrik Stenson and Lee Westwood.

With a clutch of players looking to chase him down, Jimenez admits he is feeling the pressure but claims he can handle it in his quest to win a first major.

“I feel relaxed and I love what I’m doing. I play golf, I do this for a living and I’ve been doing the same thing for 25 years. Probably some people say maybe it’s too many years but they’re wrong,” he said.

“Anything that is important to you is going to make you feel pressure and to me golf is very important. A major is more important. Being on top of this major field makes you feel a lot of pressure – but that’s what I’d like to feel on the golf course. I like to feel the pressure, as long as I can handle it there is no problem.”

Elsewhere, first-round leader Johnson endured a nightmare day as he shot a four-over-par 75 to drop back into a share of sixth.

Round of the day went to Westwood as he shot a three-under 68 to leave himself in with a shot at breaking his major duck heading into the weekend.