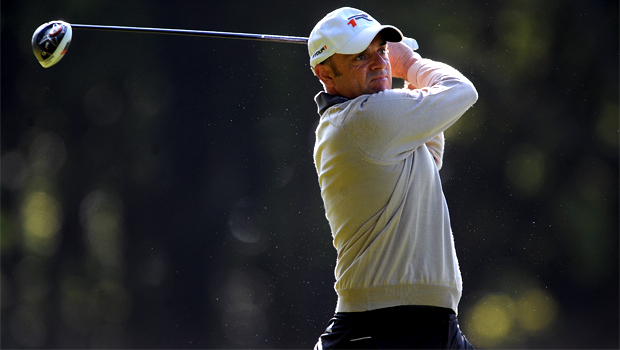 European captain Paul McGinley says he has no plans to play for the side he will lead at next year’s Ryder Cup, despite an impressive first day at Johnnie Walker Championship at Gleneagles.

McGinley was placed in a tie for 14th after the first 18 holes but was just three shots off the lead after hitting 68 at the famous old course.

Bernd Wiesberger of Austria and Argentina’s Ricardo Gonzalez are the joint leaders after each carding rounds of seven-under-par 65s.

But it was the presence of McGinley, who will have been taking special notice of how the course was playing, that attracted the most interest amid speculation his performance could tempt him to try to be a playing captain in 12 months.

However, after his efforts on the Centenary Course, McGinley dismissed any possibility of him being able to qualify for the team and is instead focused on leading Europe next year.

He said: “To be honest, I think I won’t even have myself on the points list. If I start playing well it’s a big bonus but one thing is for sure, there’s no way I can be a playing captain.

“Let’s put it in perspective, I’ve had a good round today but I’ve had a mediocre season, probably a poor season to be honest, so far.”

Englishmen Tom Lewis and Andy Sullivan are a further shot back at -5, while Francesco Molinari, who was part of the victorious European team at last year’s Ryder Cup at Medinah, shot a three-under 69 to tie for 26th.