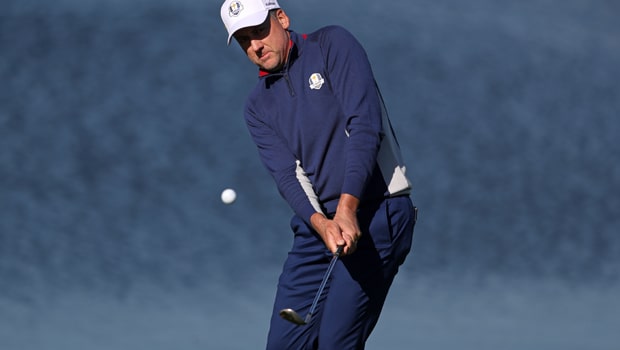 Ian Poulter, Europe’s Ryder Cup talisman, has vowed that Thomas Bjorn’s team will feed off a raucous atmosphere in Paris this weekend.

Le Golf Nacional is expected to welcome more than 250,000 spectators across three days as Europe take on Jim Furyk’s United States in the biennial event.

The Americans triumphed with a comprehensive win at Hazeltine two years ago although they have not won on European soil for a quarter of a century, since the Belfry in 1993.

“It’s going to be loud this week, and obviously home support here I think is a huge factor in this, and it’s why we have been successful for so long in Europe,” Poulter said.

“When you look at the stand on the first hole (which holds 6,500) or when you look around, it’s a perfect golf course to surround every hole with a lot of people.

“On home soil, there’s definitely help, to get behind your team is a big part of trying to win that trophy.”

Poulter’s win percentage of 72.22 – from 12 victories, two halves and four defeats – is the best of any player that has played 15 or more Ryder Cup matches in the event’s decorated history.

His exceptional record has helped capture four of the five Ryder Cups he has played in and Poulter, absent from the playing panel in 2016, wants another success on his record.

He is undoubtedly the potential opponent at the top of nearly every American’s wish-list to defeat, but that doesn’t faze Poulter.

“I take that as a huge compliment,” he said.

“It’s a daunting position to be in to know that everyone really wants to take you down, but quite frankly, I want to take them down just as much.”