Francesco Molinari the man to catch in Georgia 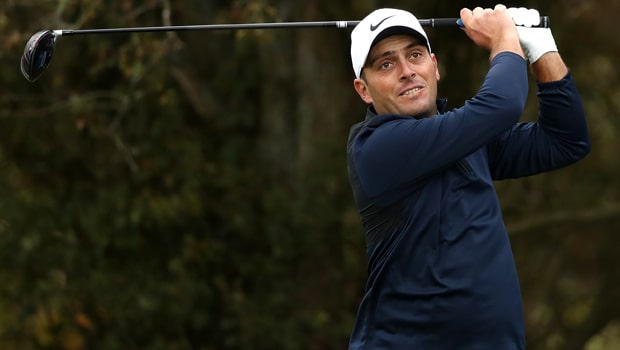 World number seven Francesco Molinari carded a superb six-under-par 66 on Saturday to open up a two-shot lead going into the final round of the 2019 Masters.

Molinari made six birdies in a second consecutive blemish-free round to move onto -13 for the tournament, two shots ahead of American Tony Finau – who earlier signed for a magnificent eight-under-par 64 – and Tiger Woods.

The 2018 Open champion, whose bogey at the 11th hole on Thursday remains his only dropped shot this week, is also the first Italian in history to lead a round of the Masters.

With the chance of potential thunder storms on Sunday, the decision has been made to send the players out earlier in three-balls, with a two-tee start time also brought into effect.

Molinari, who is the 2.70 favourite to win his first Green Jacket, will have several players chasing him down over the final 18 holes at Augusta National, including four-time winner Woods.

Speaking to BBC Sport after his round of 67, the former world number one said: “Normally you play well on Saturday, you get into the final group and look forward to the sleep-in but we’re up early tomorrow and we’ll get after it and get the mind and body ready to play.

“This is a chance to win a major so I’ll be ready.” US Open champion Brooks Koepka is in sole possession of fourth on -10 after a round of 69, three shots off the pace, and he is priced at 7.00 to land his first Green Jacket.

Englishman Ian Poulter and US star Webb Simpson are a stroke further back on -9, while Dustin Johnson, Justin Harding, Matt Kuchar, Louis Oosthuizen and Xander Schauffele are all sitting on -8.