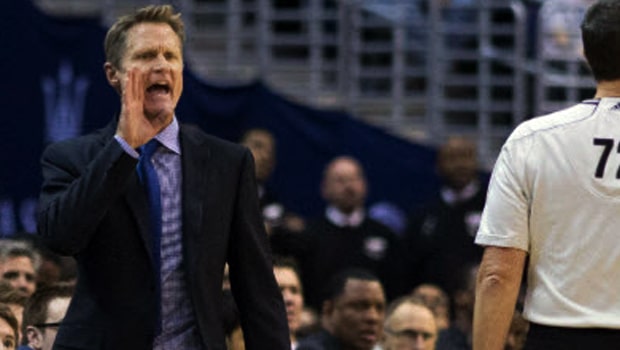 Golden State Warriors head coach Steve Kerr is confident DeMarcus Cousins will have learned valuable lessons from his first career play-off game and will come back stronger in Game 2 on Tuesday.

Cousins, who joined GSW from New Orleans Pelicans last year, has made a solid start to life with the defending NBA champions and got his first taste of play-off action in Saturday night’s 121-104 victory over the LA Clippers.

All-Star guard Stephen Curry made NBA history during the match as he moved passed Ray Allen to become the league’s all-time leader in play-off three-pointers made, nailing 386 from just 91 games.

That victory for the Warriors has put them 1-0 up in the best-of-seven series and they will be confident of getting the better of the Clippers in Tuesday’s second encounter.

Although making a winning start, play-off debutant Cousins endured a tough night as he shot 4 for 12, had six turnovers to go with nine points and nine rebounds and fouled out after 21 minutes on the floor.

Kerr is not worried about his disappointing performance and expects the 28-year-old American to turn in a much-improved display on Tuesday.

“I don’t need to say anything to DeMarcus. It was a frustrating night for him, fouling out, a couple tough calls,” he was quoted as saying by Mercury News.

“But it was important for him to get his feet wet and feel the playoffs, feel the energy and I have no doubt he’ll come back and play a lot better in Game 2.”

Golden State are 1.40 favourites to win the NBA Finals while they are shortest odds at 1.25 to win the Western Conference.