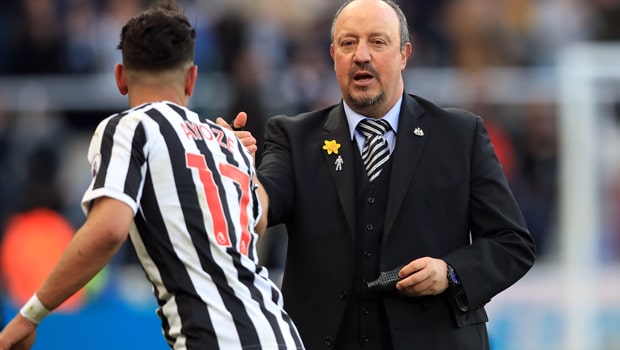 Ayoze Perez believes Newcastle United are now safe from relegation, but doubts that would be the case if Spanish tactician Rafael Benitez was not in charge.

The forward’s eighth goal of the season earned the north-east outfit a 1-0 win over Leicester City at the King Power Stadium on Friday to move the Magpies onto 38 points, 10 clear of the relegation zone.

Newcastle have four games left and have to play Southampton, Brighton and already-relegated Fulham – all teams below them – along with title-chasing Liverpool, who visit St James’ Park for the penultimate game of the season.

The Magpies are not mathematically safe from the drop, but Perez is sure they have survived with the games running out for the sides below them in the standings.

“It’s fair enough to say we’re a Premier League team again next season, it was a great effort from the lads and a great three points,” he said.

“We’re still very professional and know we can get even better and carry on the same way. “We have four to go and we have the ambition to keep climbing the table.”

After the match, Benitez, whose contract runs out at the end of the season, hinted he is ready to stay now safety is virtually assured and Perez feels without the former Liverpool manager in charge the Magpies may have gone down.

“The team has achieved great things but maybe with another manager we would have struggled even more,” he added. “That’s what happened in my second season here, we were relegated with a great team.”

Newcastle return to action on Saturday when they play host to Southampton, who head into the game on the back of a 3-1 victory over Wolverhampton Wanderers.