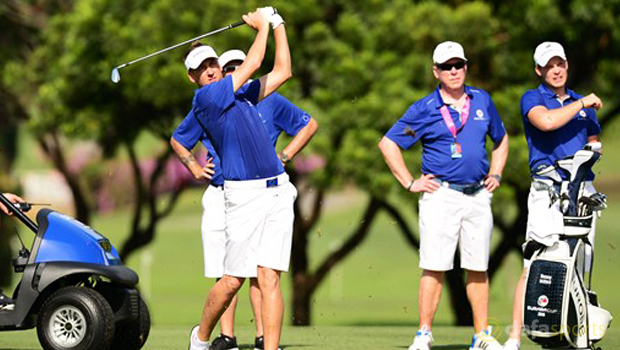 The European pair will take on Jeung Hun Wang and India’s Anirban Lahiri on Friday morning as they try to give their team the platform to build on.

Poulter brings plenty of experience to the team after winning 13 Ryder Cup points in his last five appearances.

The 40-year-old will be hoping to impress Clarke, who is also Europe’s Ryder Cup skipper, and the Northern Irishman is confident he will deliver.

“Obviously we all know Poults, we know what he brings to the team,” he said. “And to have him leading off Europe, we couldn’t ask for a better player.

“With Bernd, you’ve got a very, very young, exciting talent, who won the French Open last year; it’s a very strong pairing. I could say the same about everyone.”

Shane Lowry and Andy Sullivan face a difficult test against Shingo Katayama and Ashun Wu, while Ross Fisher and Kristoffer Broberg will do battle with Prayad Markasaeng and KT Kim.