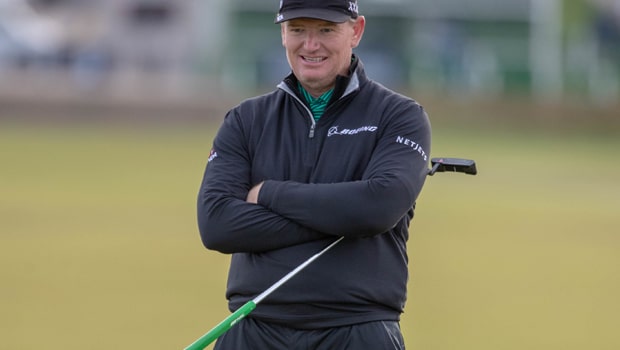 Ernie Els is among the early challengers in the Honda Classic after the veteran South African shot a first-round 66 at Palm Beach Gardens.

Els is on four-under par, two strokes shy of leader Jhonattan Vegas, following the opening round in Florida.

Els has won more than 70 tournaments worldwide, 19 of them on the PGA Tour. The last of those arrived in 2012 at the British Open and the 49-year-old joked that he would like to get the landmark win on his CV.
“Secretly on Tour among the players, you know when you win No. 20 you get some benefits,” Els said.

“It’s late in my career, but I’ll take any win now.” Vegas made six birdies in his opening round and didn’t drop a single shot to take the early lead.

He believes the layout at the Honda Classic is one that plays to his strengths, especially when the putter complies. “It’s kind of one of those courses that I think suits me.

You have to hit the ball well and you have to get around really well. And then I made a few putts,” he said.

Defending champion Justin Thomas is on two-under par after his first round, three shy of the leader.

He has Brooks Koepka, Rickie Fowler and Sergio Garcia – amongst others – just ahead on three-under par but the American is content with his start, despite four dropped shots on the back nine.

“To feel like I gave quite a few back today and shoot two-under par on this golf course, it’s great,” Thomas said.