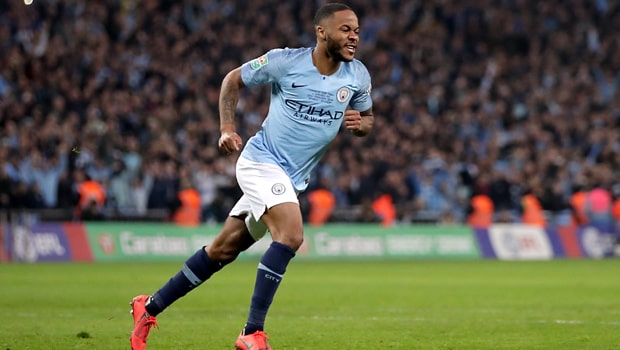 The Citizens have never before retained the top-flight title but Pep Guardiola’s side are in with a strong chance this season.

They are locked in battle with Liverpool, the Anfield side leading the way by a single point with 10 games left to play.

City steamrollered their way to glory last season, setting a record points tally, and, despite this race being much closer, Sterling says they are confident of getting the right outcome.

“We’re confident in ourselves and we’ve got the belief and the attitude and the work-rate that we need. We’re completely focused on the job and not who we’re up against but who we’ve got next – that’s all that matters,” said the England forward.

Sterling had the chance to win the league during his time at Liverpool, though the Brendan Rodgers-led Reds side of 2013/14 faltered in the run-in, allowing City to prevail.

He says the pressure is greater on the Merseyside club, gauging off his own experience as a player at Anfield.

“When I was there I did feel a lot more pressure than when I’m here, with matchdays and the fans. I think that they get to us a little bit. We were in control and we had the opportunity to see it through but we didn’t do that,” Sterling added.

“Here we’re completely focused on each game and trying to win each game as it comes. It’s a complete different scenario from last year – last year we were a bit more comfortable towards this point of the season.

“They’ve been playing some good football at times but we’re confident in ourselves and we’ve got the belief.”

Manchester City are 1.53 favourites to win the title, with Liverpool 2.50 despite their slender advantage.