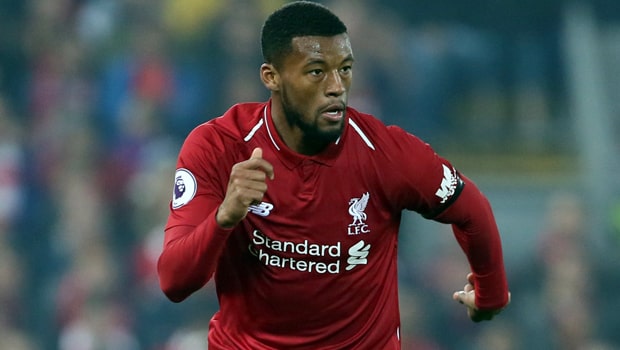 Georginio Wijnaldum says he is expecting a battle on Sunday when Liverpool travel the short distance to Goodison Park to face Everton in the Merseyside derby.

Liverpool go into the game top of the Premier League with a slender one-point lead over Manchester City.

The Toffees meanwhile are languishing in mid-table, sitting ninth, 33 points behind their Mersey neighbours. It has been a difficult first season for Marco Silva but the home crowd on Sunday would relish the opportunity of frustrating Liverpool’s title bid.

The game at Anfield earlier in the season was a tight one, finishing 1-0 with Divock Origi scoring Liverpool’s winner in the 96th minute, and Wijnaldum is expecting another battle on Sunday.

He said: “I expect it’s going to be a big fight.

“It was a good game last time we played them here. They were really good, better than all the times I’d played them before. I don’t expect them to be less motivated than they were before. I think it’s going to be a difficult game.

“They will want to stop us, but we want to defeat them badly too. It works two ways!” The head-to-head record which dates back to 1894 sees Liverpool with the advantage having won 119 times with Everton 82. Sunday’s game is the 200th Merseyside derby.

The Toffees’ recent record against their closest rivals is even worse, having failed to beat Liverpool in their last 18 fixtures in all competitions.

By the time the game kicks off on Sunday, Liverpool may have dropped down to second in the Premier League table; Manchester City will go above them if they avoid defeat at Bournemouth on Saturday.