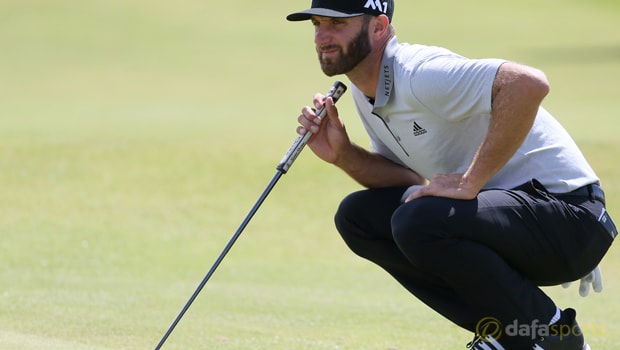 Dustin Johnson has confirmed he is still struggling with the back injury he sustained on the
eve of this year’s Masters.

The American went into the opening major of the year at Augusta with three tournaments wins in a row on the PGA Tour and was expected to challenge for the Green Jacket.

However, a fall at his rental house meant the world number one was not able to compete and he has since struggled to rediscover his best form, missing the cut at the US Open before finishing in a tie for 54th at last week’s Open Championship.

The 33-year-old has now revealed he is still struggling with the back issue. “Obviously I injured my back.

It wasn’t no bone or anything like that, it was just muscle. So I’m still feeling the effects of it,” Johnson said.

“Obviously, mentally, just a little lack of confidence maybe because I was playing so well leading into that, and for about a year leading up to the Masters, I’ve been playing really good golf.

Maybe even more than a year.” Johnson does believe there is light at the end of the tunnel and he is targeting a strong end to the season, starting with this week’s Canadian Open.

He added: “I feel like the game is starting to turn around, and it’s a good time for it to do that. “It’s close, but I’ve got three more events before the Playoffs start.

I have the Canadian Open, the WGC in Akron and the PGA. So I’ve got three big tournaments in a row and I’m working hard on the game.”

A top-quality field is set to compete in this week’s event at Glen Abbey Golf Course and Johnson is available at 7.00 to emerge as the winner.