Jason a Steele for Sunderland 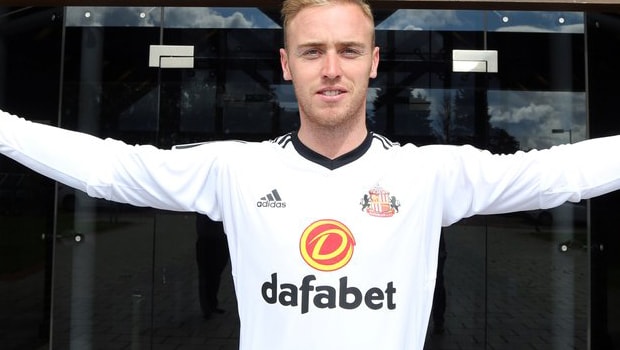 Sunderland have completed the permanent signing of goalkeeper Jason Steele from Blackburn while Lewis Grabban has joined on a season-long loan from Bournemouth.

Former England Under-21 international Steele has put pen to paper on a four-year contract at the Stadium of Light.

He is likely to be the club’s first-choice stopper this season after the departures of Jordan Pickford and Vito Mannone earlier in the transfer window.

The 26-year-old, who made 44 appearances for Blackburn last season, admits it is a “dream come true” to join a club he remembers watching as a boy.

“I’m absolutely over the moon. It’s a dream come true to sign for such a massive club,” Steele said.

“My family are pretty much split between the three north east clubs, so I spent my childhood watching them all, and I remember coming to the Stadium of Light with my uncle and cousin.”

Experienced forward Grabban, who spent time on loan at Reading last season, is also looking forward to hitting the ground running with the Black Cats.

“I’m happy to have everything sorted and I’m looking forward to the season,” Grabban told the club’s official website. “The size of the club and its history attracted me, as well the manager.”

Both players are in line to make their Sunderland debuts in Saturday’s Dafabet Cup clash against Celtic at the Stadium of Light.

The Black Cats are unbeaten in their last three pre-season friendlies and are priced at 2.20 to win or draw when they take on the reigning Scottish Premiership champions.