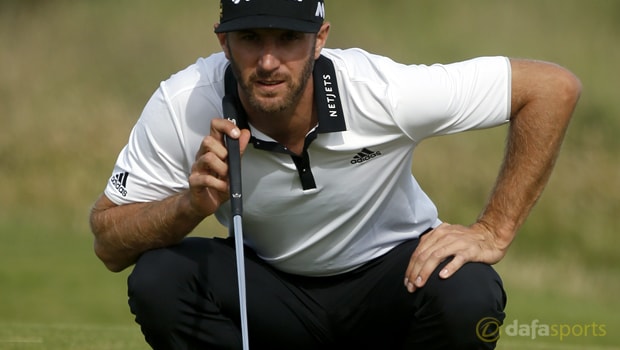 American Dustin Johnson has one eye on the world number one spot but he insists his focus is on getting the job done at the Genesis Open this weekend.

Johnson, 2.05 to win the event, birdied three of his final four holes to grab a one-shot lead at the halfway stage at the Riviera Country Club.

Storms in the area have derailed the progress of the tournament, with seven hours of play lost on Friday.

The second round was also delayed as organisers cleaned up the course but Johnson was able to keep his cool once out on the course.

The US Open champion scored a second successive round of 66 to move onto 10-under par but he is expected to come under pressure.

Countrymen Pat Perez and Cameron Tringale are just one shot behind him, while Jhonattan Vegas, Patrick Rodgers and JT Poston are all tied on seven-under in a tie for fourth.

Johnson made just two birdies on the front nine at the first and fourth holes, but three late efforts put him in command.

Speaking after his round, the 32-year-old admitted he must secure the win before dreaming of the world No.1 spot.

He told the PGA Tour: “Obviously I would like to be the best in the world. But how you get there is winning golf tournaments.

If I win this week and I happen to get to No. 1, great. I’ll definitely be excited, be proud.

“But I’ve got to take care of this week first,” Johnson added. “Tomorrow’s going to be a long day but as long as we’ve got nice weather, we’ll get it done.”