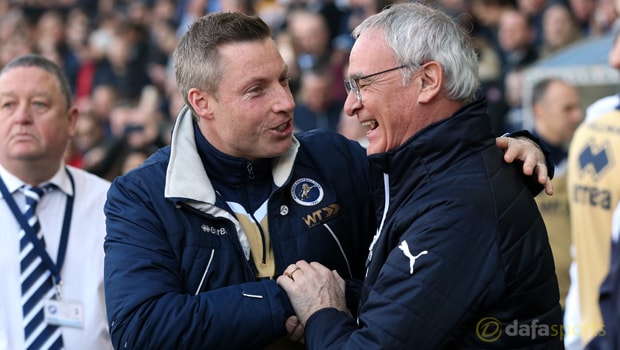 Leicester City coach Claudio Ranieri has questioned the desire of some of his players after they were knocked out of the FA Cup by Millwall.

The Foxes, 2.63 to be relegated, were once again left found wanting as they were beaten 1-0 by the League One outfit at The Den.

A 90th-minute winner from Lions defender Shaun Cummings ensured Neil Harris’ men, despite having a man sent off, progressed into the sixth round.

Saturday’s defeat puts even more pressure on Ranieri’s side following their slump down the Premier League table.

They currently sit just a point outside the relegation zone in 17th place and their last league win came on New Year’s Eve.

Ranieri made 10 changes to his team for the clash with their League One rivals but he admitted his whole squad needs to fight more, like ‘soldiers’ and ‘gladiators’.

“I want to see this. To fight until the end. I think this defeat could be good for us because when you lose against a team who is there and fight, you have to say well done to them but why have we lost?

We lost for this, this and this – and then we can take what Millwall show and take for us.

“I want to speak again with [his players] and say ‘we need to fight every match. Who wants to fight, tell me?’ Because I need the soldiers, I need the gladiators.

Because Millwall [when they were reduced to 10 men], showed fantastic gladiators.”