‘Defensive’ Tiger with work to do in New Jersey 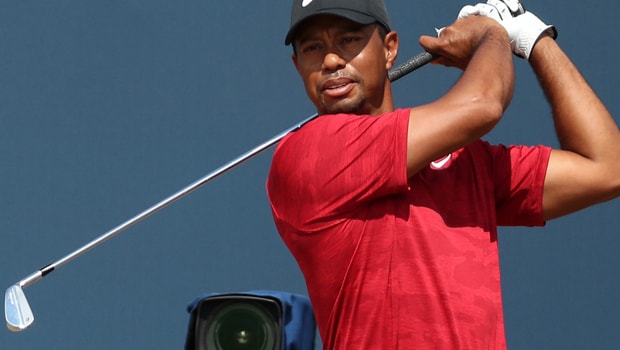 Tiger Woods felt he never put himself in a position to attack the golf course after a lacklustre opening round at the Northern Trust Open in New Jersey.

Woods had finished the US PGA Championship in a hail of glory last time out, chasing home winner Brooks Koepka in second spot, but he couldn’t carry that momentum into the first of the FedEx Cup Playoff events.

He gained a shot on the 17th, his eighth hole, but handed it back on the second. A bounce-back birdie on the par-five third was again negated when he couldn’t get up and down from a greenside bunker at the fifth hole.

An even-par round left Woods in tied-60th, five shots adrift of the four-way tie for the lead, shared by Kevin Tway, Jamie Lovemark, Vaughn Taylor and Sean O’Hair.

The 14-time Major champion suggested he was never quite in pole position to launch his approaches at the target, despite hitting 14 fairways.

“Just didn’t have the situations where I had the full club and I could go ahead and take a rip at it and start being aggressive and going after these flags,” Woods said.

“I kept having to play a little defensive because I was taking more club, trying to shape it and take spin off. One of those days.”

Defending champion Dustin Johnson is alongside this season’s double Major winner Koepka on four-under par after round one, a shot off the lead.

They are joined by Hideki Matsuyama, Paul Casey, Tommy Fleetwood and Rafa Cabrera-Bello amid a group of 13 players tied for fifth spot.

Phil Mickelson is on three-under while Masters champion Patrick Reed and Justin Thomas are on two-under after the first round.

World number one Johnson is 5.25 favourite to win the Northern Trust Open, with Koepka now 7.00 and Woods priced at 34.00.