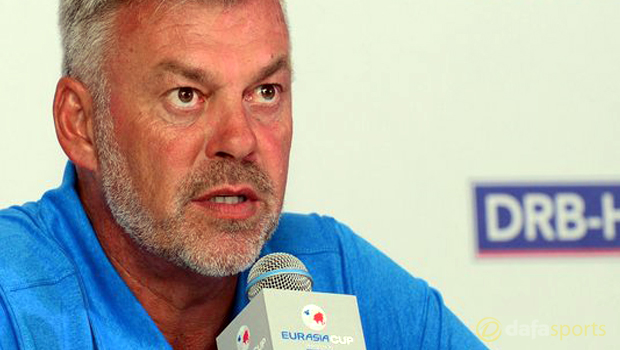 European captain Darren Clarke says he feels this week’s EurAsia Cup has the potential to once again end in stalemate.

Clarke’s team face a Jeev Milkha Singh-led Asian team at the Glenmarie Golf & Country Club in Malaysia and the 2011 Open champion believes conditions ought to favour the home team.

Clarke will be using the event to build his skill set ahead of the Ryder Cup in the United States later this year and he can call upon two European veterans of that event in Ian Poulter and Lee Westwood for his team this week.

He also the likes of Danny Willett, Shane Lowry and Andy Sullivan – all of whom will have designs on a Ryder Cup debut at Hazeltine.

Despite the strength of his line-up, Clarke is not underestimating the job at hand.

“We are playing in the Asian team’s backyard, so they are a bit more used to the heat and humidity than we are, which may give them a bit of an advantage,” Clarke told a pre-tournament press conference.

“When the humidity comes with this sort of heat, it is quite oppressive. And it probably feels even hotter than the last time we were here. But with the co-sanctioned events we have in Asia, the Europeans do have experience playing here.”

The inaugural EurAsia Cup in 2014 ended 10-10 with the teams sharing the cup and Clarke believes it will be every bit as tough to separate the team this time around.

“It’s too close to call, and I think there’s a pretty good chance it could end in another draw. You have two very strong teams, and because it’s match play anything could happen,” he added.