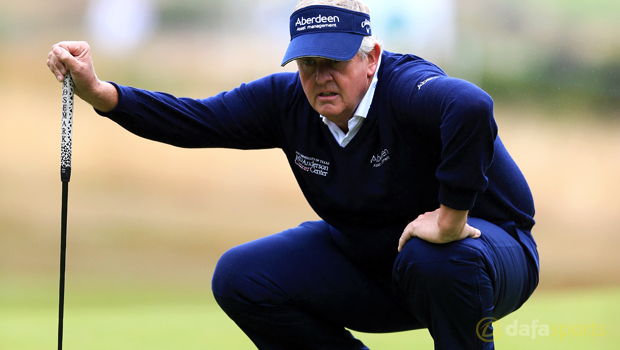 Former runner-up Colin Montgomerie was among the latest wave of players to secure a place in the field for next month’s Open Championship at Royal Troon.

Montgomerie made the event for the first time since 2010 by coming through a 36-hole final qualifier at Gailes Links in third spot.

The 53-year-old fired rounds of 66 and 71 to put himself in the mix and while he had to wait as players on the course threatened to overhaul him, the former Ryder Cup captain and eight-time European Tour Order of Merit winner was elated to be confirmed as an Open contender once again.

“It means the world to me, sure it does, and I look forward to playing and am delighted to do so”, Montgomerie said in an interview posted on The Open’s official Twitter feed.

“I had an opportunity at the Senior Open when I was two ahead with eight to go and didn’t win, and then of course you think you have blown the thing.

“But it was nice to come here with 72 players, a high-quality field and to finish third, which is all one has to do.”

Montgomerie finished second to Tiger Woods in the 2005 Open Championship at St Andrews and will now get the chance to compete for the final time at his home course.

“This will be my last opportunity to play at Royal Troon because it only comes around once every 12 years,” he added.

Ireland’s Paul Dunne, who shot to fame when he led at St Andrews with 18 holes to play as an amateur last July, also qualified at Woburn GC on Tuesday after rounds of 68 and 67 left him nine-under par and top of the pile.

World number one Jason Day is 8.50 to win the Open Championship at Royal Troon while 2014 Claret Jug winner Rory McIlroy is 8.00.