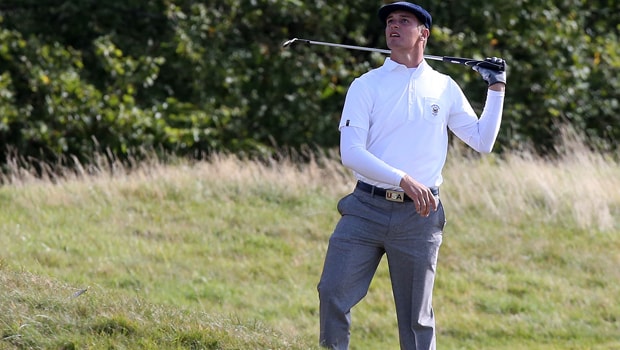 Bryson DeChambeau says he thinks he will be able to recover from injury in time for next week’s Open Championship at Carnoustie after he was forced to withdraw from the John Deere Classic on Thursday.

DeChambeau arrived in Illinois as the defending champion, having landed his maiden PGA Tour title by one stroke last year, and many were predicting another solid performance.

However, the American complained of pain in his right shoulder after hitting his second shot from the rough on the second hole at TPC Deere Run, although he did manage to battle to the 16th green before withdrawing from the tournament.

With the Open getting underway on Thursday, it is a huge injury scare for the 24-year-old, who is set to make just his second appearance in the third Major of the campaign.

But, DeChambeau is feeling optimistic about his chances of playing in the event at Carnoustie and expects to have made a full recovery by the time he touches down in Scotland.

“Oh, yeah, I’m not going to not make the trip,” he said when asked about the Open.

“I feel like I can still swing and hit a shot, I just don’t feel like it would be productive to do so here.

“I don’t feel like it’s going to be too long a recovery time. I had the same thing kind of happen to me at Valspar and it was a pretty bad injury on my back.

“I was able to recover and obviously finish second at the Arnold Palmer Invitational, so my body is pretty resilient. I’m young, and I think I can recover in time.”

DeChambeau is currently priced at 67.00 to win the Open whilst his fellow American Dustin Johnson leads the betting at 12.00, just ahead of Northern Ireland’s Rory McIlroy at 13.00.