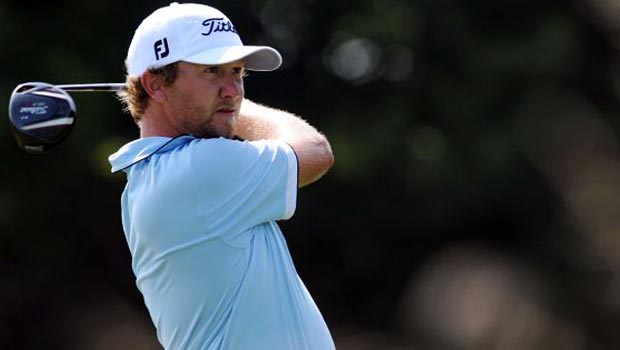 Brice Garnett is halfway to his first ever win on the PGA Tour after moving one-shot clear of the field at the Crown Plaza Invitational on Friday with a second round 66.

The Missouri resident has had limited success in his 18 PGA Tour outings to date, with just one top 10 finish to show for his efforts thus far.

That tie for seventh came just six weeks ago at the Shell Houston Open and the 30-year-old says he is enjoying playing in Texas after moving to the top of the leaderboard on his return to the lone star state.

“For some reason, it’s just I’ve kind of adapted to Texas golf,” he told the PGA Tour website. “Growing up back home in the spring and fall, it gets pretty windy as well. I kind of relish whenever the wind blows and (you have) kind of got to control your ball.”

Having started with an eagle, Garnett produced a four under par round off 66 which also included three birdies and one bogey as he moved on to seven-under for the tournament.

Garnett leads Chris Stroud (64) and Robert Streb (68) heading into the weekend but says as a rookie he isn’t feeling the weight of expectation and is just enjoying his game.

“I think each and every week the rookies feel more comfortable. I know I have,” Garnett said. ‘You can’t get down on yourself being a rookie. … It’s been fun, and I’m learning each and every day.”

Garnett will do well to maintain his current position with a host of more experienced players amongst the chasing pack, including first round leader Dustin Johnson.

The American is one of seven players in a tie for fourth on five under after shooting an ever-par 70 on Friday.

Joining Johnson five-under is current FedEx Cup points leader and Texas resident Jimmy Walker, who is 9.00 to win the Crowne Plaza Invitational, with his compatriot Johnson 7.50.

Further down the leaderboard and new world number one Adam Scott made three birdies in the last seven holes to make the cut on one-under. The Australian has now made the cut at his last 34 PGA Tour events and confirmed his place at the top of the rankings for another week as a result.