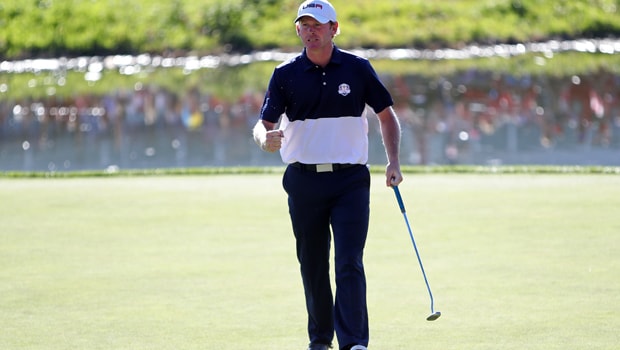 Brandt Snedeker admitted he was as surprised as anyone after shooting a superb first-round 59 to lead the Wyndham Championship.>

Starting from the 10th, the 37-year-old dropped a shot at his first hole but four birdies ensured he reached the turn in three-under.

Six more followed on his back nine plus an eagle as the Tennessee resident recorded just the 10th sub-60 round in PGA Tour history.

Snedeker has enjoyed an up-and-down year to date, with three top-10 finishes but seven missed cuts and the eight-time PGA Tour winner confessed that he had no idea that he would make history earlier in the week.

“If you’d seen my play yesterday, nobody could see this coming, trust me,” he said.

“Crazy day. You start off with a bogey, a snap hook three-wood off the 10th tee, but I made some long putts on the front nine and got hot on the back nine.”

DA Points and Canada’s David Hearn are among a group of seven players on -6, while US Ryder Cup captain Jim Furyk joined eight other players on five-under.

Spaniard Sergio Garcia is desperately trying to find some form with the Ryder Cup looming, and the 2017 Masters champion managed a four-under-par 66 to take a share of 20th after the first 18 holes in Greensboro.

But it was all about Snedeker on day one, with the two-time Ryder Cup ace sinking a 20-foot birdie putt at his final hole to break 60.