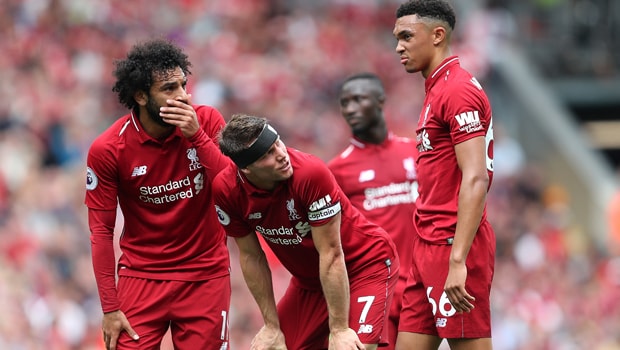 James Milner says nobody at Liverpool will be talking about being title contenders after one Premier League victory.

He described the 4-0 demolition of West Ham at Anfield as the “best possible” start to their Premier League campaign, while insisting there is plenty more to come from the Reds.

Talk of challenging champions Manchester City for their crown is for others to indulge in however, according to the former City player.

Last season’s Golden Boot winner Mohamed Salah set Jurgen Klopp’s men on their way against the Hammers before Sadio Mane netted a double and Daniel Sturridge added a late fourth seconds after coming on as a late substitute.

Milner was delighted to get off on the correct footing, but declined to be drawn on the subject of a title challenge. “That’s for other people to talk about.

You guys (media) are going to discuss it, we just want to start the season well and keep improving as a squad and see where that takes us,” he told a press conference in Scotland.

“Obviously it is early days and the first game of the season you want to get off to a good start, it is very important.

“It is never easy coming out of pre-season when you have players returning at different times due to the World Cup but you just want to get off to a good start and get a win.”

Milner admits that showing their ability to perform consistently is the next step.

“It was a good starting point, plenty we can work on but the best possible start and hopefully we can kick on from there,” he added.

Liverpool are 1.44 to win their next game at Crystal Palace on Monday, while the Anfield outfit are 4.00 to end their wait for a Premier League title this season.