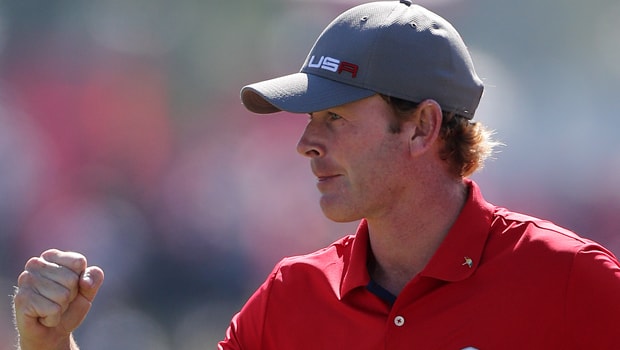 American Brandt Snedeker says it was a great feeling to finally see his months of hard work pay off as he won the Wyndham Championship by three shots on Sunday.

The 37-year-old had to play 29 holes on the final day after poor weather conditions disrupted the third round.

He finished his third round on Sunday morning before then carding a round of 65 to finish 21-under for the tournament.

Snedeker completed a wire-to-wire victory and never looked back following his record-breaking 59 on day one.

He birdied the 18th to put pressure on rival CT Pan, but the latter could only produce a double bogey when it mattered.

Snedeker eventually finished two clear of Pan and Webb Simpson and admits it was a proud day to finally see his training pay off in a big event in front of his family.

He told the PGA Tour: “It means the world to me that I have not failed them finally. It’s a great teaching lesson for them. They’ve seen how hard I’ve worked. They’ve seen the amount of time I’ve spent away from them trying to get to this point, so it’s good for them to see, hey, it works, pays off.

“If you keep your head on straight and do stuff the right way and keep working your tail off, you do get rewarded. So I think more than anything else, I’m more proud of that fact.”

After his second win at the event, Snedeker will now be hoping to make the Ryder Cup team. He is currently 37th in the rankings and would need captain Jim Furyk to pick him as a wildcard.