Rory McIlroy in contention at Wentworth 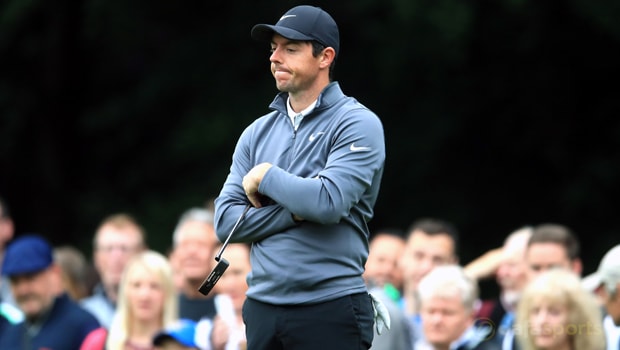 Rory McIlroy got off to an ideal start with a five-under par opening round in the BMW PGA Championship at Wentworth.

The four-time Major champion has had an up and down season so far, with a win at the Arnold Palmer Invitational in March offset by a disappointing final round mini-collapse at the Masters soon after when he failed to mount a challenge to Patrick Reed in the final two-ball.

McIlroy has missed four cuts in eight previous appearances at the BMW, although he also won at Wentworth in 2014.

That win sparked the finest summer of McIlroy’s career to date as he went on to win both The Open and PGA Championship either side of the WGC-Bridgestone Invitational.

He is two shots off the lead going into round two on Friday, with Denmark’s Lucas Bjerregaard out in front on seven-under par.

McIlroy bogeyed the third hole on Thursday before picking up birdies at four, six and eight.

Another shot was dropped at the ninth, but he bounced back again with a two at the par-three 10th.

He picked up further shots at 12, 14 and 16 and, having somehow escaped an errant second shot on the final hole, he almost pitched in for eagle, only to then miss a short birdie putt that would have left him one behind the leader.

McIlroy was pleased with play at the European Tour’s flagship event as he seeks to kick-start the summer.

“I think I did everything pretty well,” McIlroy told reporters.

“I drove the ball much better and put the ball in play off the tee a lot more than I’ve done the last couple of weeks, so that’s really good.

“I gave myself a lot of chances and I took most of them. I’m a little frustrated I couldn’t get a birdie or two out of the last couple of holes, but overall, a really good start.”

McIlroy is 3.75 to go on and win the BMW PGA Championship at Wentworth while England’s Matthew Fitzpatrick, also five-under after round one, is now 10.00.