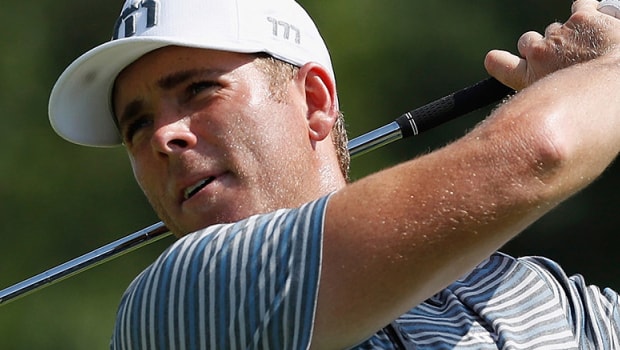 American Luke List produced a brilliant performance on day two of the CJ Cup at Nine Bridges to open up a slender one shot advantage at the halfway point of the tournament.

List, who is still searching for his maiden PGA Tour title, has put himself into a strong position at the midway point of the inaugural competition after his fine display on Friday.

The 32-year-old, who started his round on the back nine, made birdies at the 10th and 18th before making further gains at the 3rd, 8th and 9th, signing for a five-under-par 67 to move onto -9 for the tournament.

Compatriots Lucas Glover and Scott Brown, who is chasing his first win since 2013, are just a shot back on -8 after carding rounds of 67 and 66 respectively whilst 2017 US PGA Champion Justin Thomas is in a three-way share of third on -7.

The 24-year-old, who was in supreme form on day one, struggled during his second round, mixing five bogeys with just two birdies for a disappointing two-over-par 74.

He is joined on -7 by Cameron Smith, who broke his PGA duck at the Zurich Classic of New Orleans this year, after the Australian had a blitz of birdies after the turn to card a four-under 68.

Marc Leishman, also from Down Under, South Korean Whee Kim and the American pair of Patrick Reed and Chez Reavie are in a four-way tie for sixth on -6, three strokes off the lead.

Belgian Thomas Pieters, who is pushing for a second Ryder Cup appearance at next year’s event, is the highest placed European at the halfway stage after he went round in 68 on Friday to move onto -5.

He is joined on that mark by South African Branden Grace and the US trio of Ollie Schniederjans, Kyle Stanley and Charles Howell III.