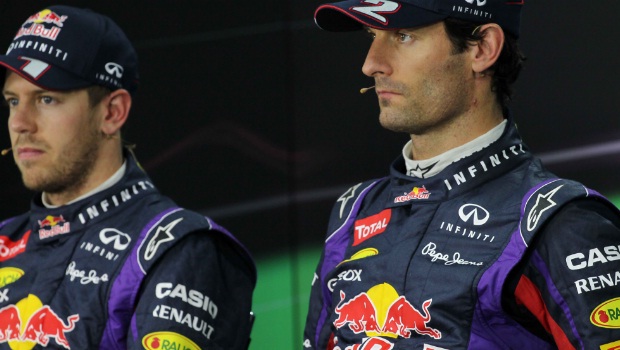 A win for Vettel on Sunday will see him pick up the world title for the fourth time if his closest rival Fernando Alonso does not finish in the top eight.

The Spaniard had a poor qualifying campaign and will start on the grid in eighth spot, three behind fifth-placed team-mate Felipe Massa, while the Spaniard is also behind Mercedes’ Nico Rosberg and Sauber’s Nico Hulkenberg.

After yet another season off ill luck, Webber will be hoping for better fortune on Sunday and his pole position is the first of the campaign for the Australian who is leaving the sport at the end of the year.

It was also marks the first time he has out-qualified his rival Vettel in 2013 and he is now looking forward to the race and said that if he could win at Suzuka in his final season “it’d be awesome, absolutely special”.

“It’s a great track, we all love driving here. The laps weren’t too bad. You always want a little bit more. It was pretty good,” Webber said.

“Sebastian had a problem so a little bit of a hollow result. But happy to be on pole and you’ve got to grab the opportunity when you can.

“We did have a problem but I am not a big fan of this, ‘without this, with this’, it is always an unknown,” said Vettel. “The car was phenomenal and you don’t get many days like that when the car feels great and you can really push it to the limit. I enjoyed it.”