Red Bull: Sebastian Vettel wins but must wait for title 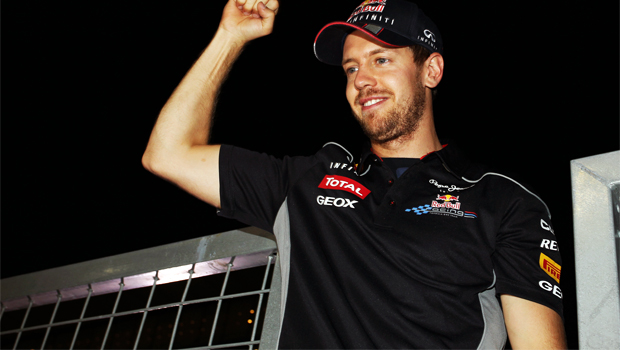 The German had started the race in second place on the grid behind Red Bull team-mate Mark Webber, but he immediately dropped to third when Lotus driver Romain Grosjean stormed into an early lead.

Vettel could have been taken out at the first corner when his front-wing was clipped by Lewis Hamilton’s Mercedes but, while the British driver was eventually forced to retire because of damage to his rear bodywork, the Red Bull man was able to continue.

The championship leader managed to pass Webber when he went in for a pit stop on lap 25 and later took advantage of having fresher tyres to eventually usurp leader Grosjean heading down the pit straight to start lap 40.

He remained out in front for the remainder of the race to collect a ninth win of the season and a fifth successive race victory to sit 90 points ahead of Alonso with only 100 available from the remaining four races.

Vettel will win the title in India in a fortnight if he secures a top-five finish, but will also seal it if Alonso scores no more than
10 points more than him.

“I’m blown away with today’s race,” he said afterwards. “I had a very, very poor start. I clipped a little bit the front wing, I couldn’t go anywhere.

Meanwhile, Webber went past Grosjean going into Turn One at the start of the 52nd of 53 laps to ensure a one-two for Red Bull.
Lotus’ Kimi Raikkonen took fifth place ahead of Sauber’s Niko Hulkenberg, whose team-mate Esteban Gutierrez scored his first points with a seventh-placed finish.

Mercedes’ Nico Rosberg finished eighth ahead of McLaren’s Jenson Button and Ferrari’s Felipe Massa, who lost ground with a drive-through penalty for speeding in the pit lane.