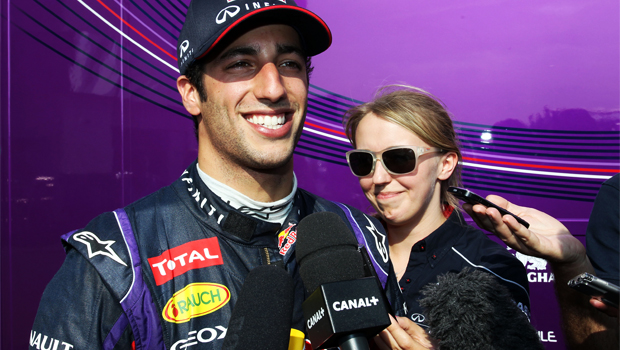 Red Bull have been searching for a replacement for the Australian driver since he confirmed he was leaving at the end of this season.

Kimi Raikkonen had been the favourite to succeed Webber, with some reports from the pit lane indicating a deal had already been struck with the Finn whose contract with Lotus expires this year.

However, talk of a deal for the 2007 world champion has gone quiet and speculation at the Hungarian Grand Prix suggested Red Bull could be prepared to make an audacious bid to try and sign Ferrari’s Fernando Alonso after meeting with the Spaniard’s agent.

Despite potentially have two former world champions ready to join, Red Bull owner Dietrich Mateschitz and his motorsport advisor Helmut Marko are still thought to be keen to promote from within their own drivers’ stable.

Ricciardo was given the chance to impress at the Young Driver Test when he allowed to drive the current Red Bull car, the RB9. Despite spinning off on his first day at Silverstone, the Australian is thought to have impressed the hierarchy of the constructors’ champions.

Ricciardo’s team boss at Toro Rosso, Tost, believes there is every chance his driver will now graduate from the feeder outfit to partner Sebastian Vettel next season.

“Red Bull Racing is showing interest in Daniel and the decision will be made inside Red Bull. So there is no decision yet – but my understanding right now is that it could, in fact, be Daniel,” said Tost.

“I think that analysis has shown that Daniel is going strong so far – especially in qualifying – that he has raised his game continuously and there is still half the season to go where he can gain even more experience.

“He must never forget one thing: he would be moving to Red Bull Racing – the three-time world championship team – which means that the bar is pretty high.

“To race alongside Sebastian (Vettel) you better have what it takes if you are not planning to drown. And I think that Daniel – should Red Bull point at him – has it.”