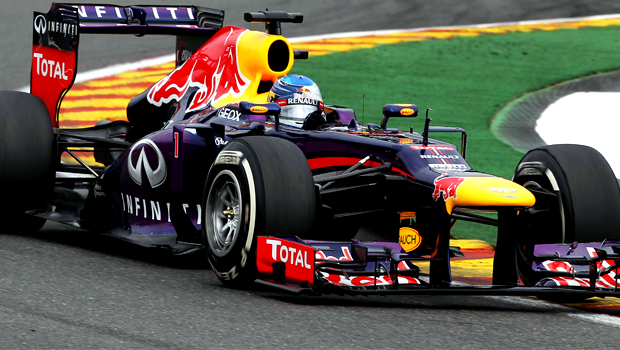 Sebastian Vettel tightened his grip on the championship following a dominant victory in the Belgian Grand Prix.

Lewis Hamilton, who started in pole position, said before the race that the Red Bull car was still the one to fear and that turned out to be the case as Vettel cruised to the chequered flag.

The German passed Hamilton on the very first lap in the race and from then on the result never looked in doubt as Vettel wrapped up one of his easiest wins.

Fernando Alonso took second and is the closest challenger to Vettel in the standings, even though he remains a massive 46 points behind, while Hamilton finished third.

There are still 200 points up for grabs but it is looking ominous for the rest of the field after Vettel won his fifth race out of 11 in this campaign.

“It was a fantastic race for us,” said Vettel. “From start to finish really, very good tactics – it helped the first lap to have the tow off Lewis into Eau Rouge. Once I passed him I had incredible pace and could control the race.”

Despite having to settle for third, Hamilton was pleased with his performance and his place on the podium.

“These guys were a little bit faster than me, but the team did a great job and I’m really happy with the result,” he added.