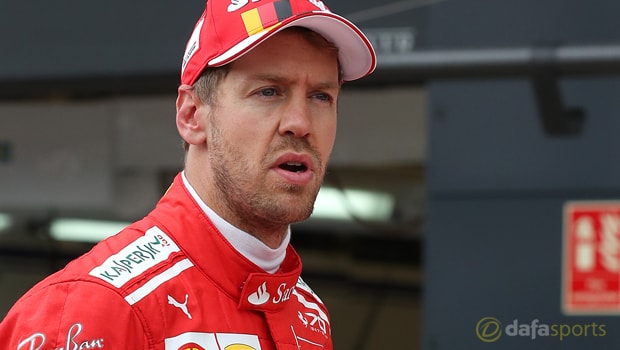 Sebastian Vettel has rejected suggestions that Ferrari have been using team orders to favour him over Kimi Raikkonen.

Heading into this weekend’s Italian GP, the German currently leads the Drivers’ Championship by seven points from Mercedes’ Lewis Hamilton.

It means Vettel will need every point possible if he is to maintain his position between now and the end of the season.

If push comes to shove, the hierarchy could be tempted to tell Raikkonen to move aside, with the Finn currently only fifth in the standings.

A number of sources have suggested that this has previously happened but Vettel is adamant it is not the case ahead of the meeting at Monza.

The four-time world champion believes Ferrari do not dictate how he and his colleague drive, insisting they are always allowed to race each other fair and square.

“I am a bit surprised by the way things are put,” he said.

“I think we are racing for the team, we’re both trying to our best, if it happens that you race for the same spot then you might meet yourself on track.

“You’re both fighting for yourself but you’re also fighting for the team, so it’s something you need to keep in the back of your mind.”

Vettel is 2.70 to win the Drivers’ Championship, with Hamilton leading the betting at 1.44.

The German also trails the Brit in the odds to win in Italy, with him currently 3.80 and his rival 1.53.