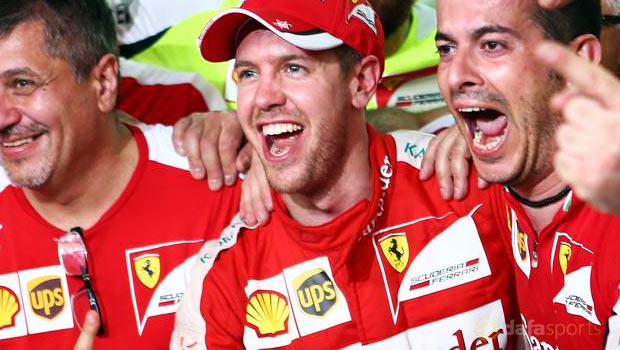 Sebastian Vettel insists Ferrari should not get carried away even after his excellent victory at the Malaysian Grand Prix.

The German was taking part in only his second race for the team following his switch from Red Bull, but capitalised on a bad day for the Mercedes duo of Lewis Hamilton and Nico Rosberg to come home first in Sepang.

Vettel, who won four drivers’ titles with Red Bull between 2010 and 2013, replaced Fernando Alonso at Ferrari after the Italian team endured their worst season since 1993 last year.

He said: “I’m speechless. Last year was not a good year for me with Red Bull. We had a great car but I was struggling to extract the performance. This year’s car suits me very well.

“I’d like to be in the same position at every race, but we must be realistic, Mercedes were struggling here but they have a great package and our target is to make the gap smaller at every Grand Prix and make sure that we are the team right behind them.”

Mercedes struggled with their tyres in the tropical heat, with Hamilton, who won the opening race of the season in Australia earlier in March, having to settle for second spot and Rosberg finishing third.

Ferrari’s Kimi Raikkonen, who fought back from an early puncture, was fourth, while the McLarens of Alonso and Jenson Button both retired.

Alonso was ninth when overheating of his hybrid system forced him to drop out of the race, while Button was towards the back of the field when he retired with turbo failure.