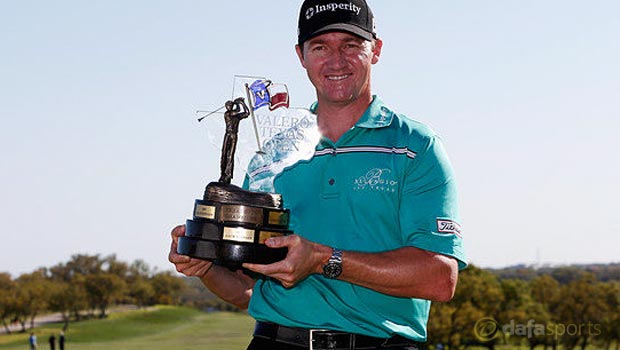 Jimmy Walker admitted after his success at the Valero Texas Open that it had been particularly pleasing to win his hometown event.

The 36-year-old put together a solid final round to finish four shots better off than runner-up Jordan Spieth.

It was Walker’s second tournament victory of the season following his triumph by a massive nine shots at the Sony Open in Hawaii in January.

“Spieth really made me fight hard,” Walker said after his win. “He kept hitting it close, and I had to keep making putts.

Both Walker and Spieth shot rounds of 70 on the final day and are now both in the world’s top 10.

Earlier in March the 21-year-old Spieth prevailed in a play-off to win the Valspar Championship.

Billy Horschel finished third after firing a 71 over the last 18 holes of the tournament while Daniel Summerhays was in a tie for fourth with Chesson Hadley on three-under.

Meanwhile, on the European Tour, Richie Ramsay managed to win the Trophee Hassan II in Morocco despite dropping four shots in two holes during his final round.

The Scot appeared to be cruising to victory when he birdied four holes in a row but then had a bogey on the seventh before enduring a triple bogey six on the short eighth hole.

He regrouped well though and finished his round strongly to end the tournament one shot clear of second-placed Romain Wattel.