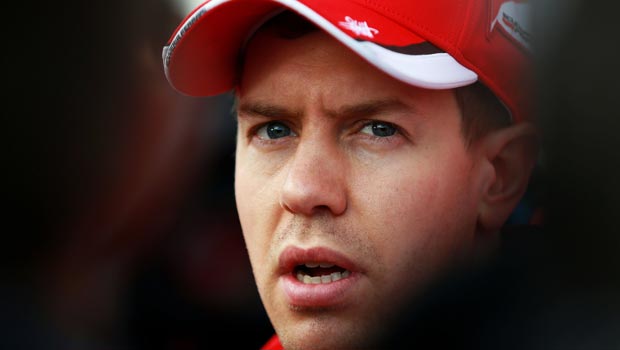 Sebastian Vettel believes Ferrari have a good opportunity to claim victory at the Malaysian Grand Prix on Sunday after splitting Mercedes in qualifying.

The 27-year-old joined the Italian outfit over the summer, ending his illustrious spell with Red Bull where he claimed four world titles.

The German had to settle for a third-place finish at the season opener in Australia a fortnight ago, with Mercedes pair Lewis Hamilton and Nico Rosberg finishing first and second respectively.

Vettel has been talking up Ferrari’s chances after making some positive steps forward during pre-season testing and he demonstrated the improvement on Saturday.

The former Toro Rosso man took advantage of the wet conditions in Sepang to force his way in between the Mercedes pairing, finishing just 0.074 seconds behind Hamilton who claimed pole.

Ahead of Sunday’s race, Vettel admitted that “anything is possible” as Ferrari look to stop their rivals from picking up another one-two finish.

Vettel said: “You never know, just look outside! Obviously when it starts to rain here – and there’s always a high chance – it can mix up things.

“I think it was an interesting qualifying session and the car felt good in both dry and wet conditions at the end.

I’m reasonably happy and also the long runs look good on practice days, so we should be in good shape, but we know that they [Mercedes] are difficult to beat.

“That’s ultimately why we turn up – trying to win, so we will see what we can do tomorrow. Maybe it looks like we are a little bit closer here, but we will have to wait and see, I guess.”