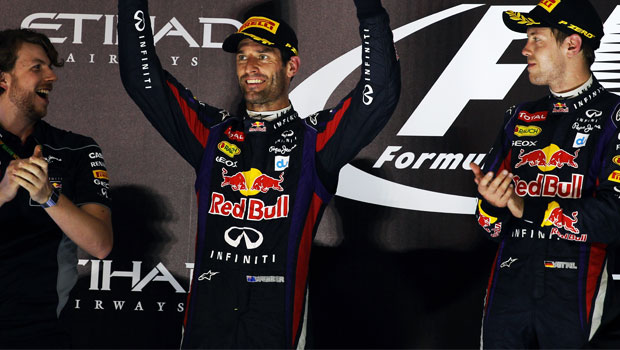 Red Bull emphasised why they have won both the Constructors’ and Drivers’ Championships with another dominant performance in qualifying for the Abu Dhabi Grand Prix, although it was Mark Webber who claimed pole ahead of Sebastian Vettel.

The Australian has struggled to get the better of his team-mate at Yas Marina, or indeed anywhere really, but clocked a time of one minute and 39.957 seconds – a tenth of a second quicker than Vettel – in his final run to claim only his second pole of the season.

Webber is set to leave Red Bull and Ferrari at the end of the season and would love to at least grab himself one more victory to end his Formula One career on a high, giving himself the best possible chance on Sunday with his position at the top of the grid.

He will be looking to go one better than Japan last month when Vettel reversed the qualifying form to take the chequered flag and Webber remains confident ahead of Sunday’s Grand Prix.

“This weekend has gone pretty smoothly for us,” Webber said.

“Overall I’m happy with the pole. It was a good lap on a track that, in the past, hasn’t been super invigorating for me in terms of layout but we certainly enjoyed qualifying today and we are looking forward to the race tomorrow.”

Vettel had no real complaints about the result, paying tribute to his team-mate as well as the threat posed by Mercedes, but insisted that pole positions do not necessarily translate to race winds.

“We were still pretty competitive,” the reigning champion said.

“There is no guarantee [of pole], it is a great result for the team first of all. Mercedes were very strong, both Nico and Lewis, we seemed to be able to find a bit of extra time in Q3 and Mark managed to do a really good lap so congratulations to him.

“I think I should have done a little bit better but I don’t know if that would have been enough and Mark deserves to be on pole tomorrow.”