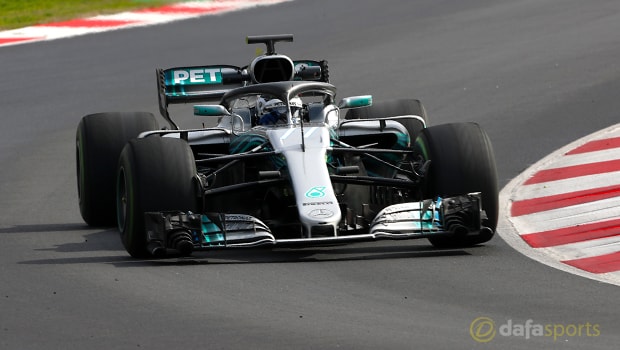 Mercedes star Valtteri Bottas says he will look to use the disappointment of Azerbaijan to pick up his first victory of the season at the Spanish Grand Prix on Sunday.

Bottas, who is in his second season with the Silver Arrows, was on course to strike in Baku’s street circuit last time out until a late puncture scuppered his chances of glory.

The Finn failed to finish the race and he currently sits fourth in the Drivers’ Championship on 40 points, 30 points behind team-mate Lewis Hamilton, who went on to triumph in Azerbaijan.

Next up on the F1 calendar is a trip to Spain and the 28-year-old will be hoping for a vast improvement from last year’s edition, having been forced to retire at the Circuit de Barcelona-Catalunya.

Bottas, who is 26.00 to win the world title, is not worried about the Baku disappointment and wants to use that near-miss to spur him onto victory this weekend.

“Of course it was disappointing, but life and especially motorsport includes disappointments,” he said.

“I always find that disappointment can be your best opportunity to be stronger if you take it the right way.

“So I am planning to be even stronger next weekend and for the rest of the year.”

Bottas is priced at 10.00 to win in Spain, the same price as Red Bull pair Max Verstappen and Daniel Ricciardo and Ferrari’s Kimi Raikkonen, whilst Hamilton is a 2.60 chance to make it back-to-back victories.

German Sebastian Vettel, who has looked impressive for the Maranello-based outfit throughout the campaign so far, is the narrow favourite at 2.50 to clinch his third win of the season.