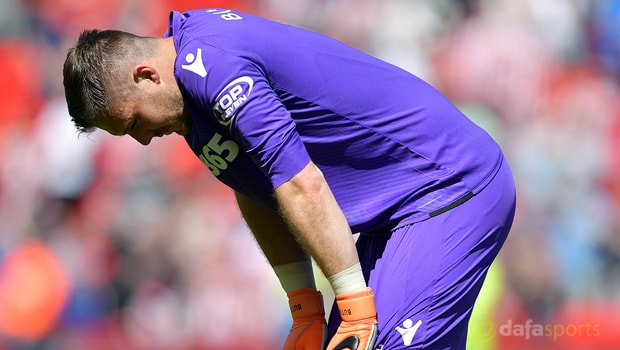 Stoke City goalkeeper Jack Butland says the club’s transfer policy must be drastically changed before they can start thinking about signing new players this summer.

The Potters lost 2-1 against Crystal Palace at the Stoke Stadium on Saturday and that defeat confirmed the club’s relegation from the Premier League to the Championship.

West Brom’s surprise 1-0 victory at home to Tottenham Hotspur in the late kick-off was enough to lift the Baggies to 19th in the standings and leave Stoke propping up the table.

England international Butland, who was in tears on the pitch after the final whistle was blown, has pointed the fingers at the poor transfer business over the past 12 months or so.

Striker Saido Berahino was signed in January 2017 but he is yet to open his account whilst defender Kevin Wimmer, an acquisition from Tottenham Hotspur last summer, is training with the Under-23’s at the moment.

Jese Rodriguez was signed on a season-long loan from Paris Saint-Germain but, after several disciplinary issues, his deal was recently ended early due to personal reasons.

It is the lack of characters in the squad that has really hurt Stoke and Butland, who is expected to leave in the upcoming transfer window, says a big change is needed before the club can start to rebuild.

“The whole recruitment process needs looking at, to be honest,” he was quoted as saying by BBC Sport.

“You’ve got to look at that – what decisions are being made and the type of characters.”