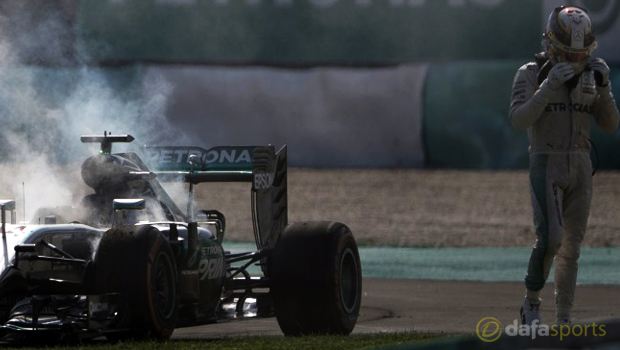 Mercedes star Lewis Hamilton’s hopes of winning a fourth world title have been made harder after he was forced to retire from Sunday’s Malaysian Grand Prix due to engine failure.

Hamilton, who started on pole position after a dominant performance in qualifying, made a good start at the Sepang International Circuit and was comfortably leading from the off.

Silver Arrows team-mate Nico Rosberg was involved in a first-corner crash with Ferrari’s Sebastian Vettel, which resulted in the latter retiring from the contest and the championship leader dropping down to 21st.

Everything appeared to be going the way of the race leader but, on lap 41, the Briton’s engine caught fire and he was forced to pull into the gravel.

It was a huge disappointment for the 31-year-old, who was hoping to close the gap to Rosberg at the top of the Drivers’ Championship, and there is now a lot of work to do in the five remaining races of the season.

Matters were made worse as the German battled back to clinch third spot on the podium, extending his championship lead to 23 points with five races left.

Red Bull’s Daniel Ricciardo managed to pick up the victory in Malaysia, just ahead of highly-rated team-mate Max Verstappen, who impressed once again.

Kimi Raikkonen was able to put a smile on the face of Ferrari fans after the Finn ended up in fourth position, ahead of Williams’ Valtteri Bottas.

Force India’s Sergio Perez was sixth, Fernando Alonso finished in seventh for McLaren in what was a good run with the second Force India car of Nico Hulkenberg in eighth.

Rosberg is now the favourite to win a maiden world championship and it will take some special performances from Hamilton to stop his team-mate from lifting the trophy.