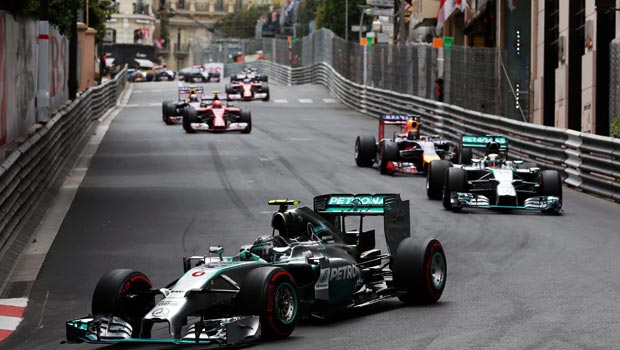 Mercedes’ Nico Rosberg secured pole position for Sunday’s Monaco Grand Prix ahead of team-mate Lewis Hamilton but will have questions to answer after a mistake on the last lap cost the Brit.

The German driver was the quickest in Q1 and then opened up Q3 at the top of the time sheets, clocking a time of 1:15.989 that was 0.059 seconds better than Hamilton.

The duo, along with Red Bull’s Daniel Ricciardo, then returned to the pits for a fresh set of tyres and one last crack at securing pole.

However, the anticipated shoot-out didn’t take place as Rosberg was forced on to the escape road at Mirebeau after a big lock-up of his brakes during his flying lap.

The incident brought out the yellow flags and forced Hamilton to abandon his lap, with the Drivers’ Championship leader having looked to be on course to secure pole.

With no time left to set another lap time, Hamilton was forced to settle for second and was visibly upset with his team-mate for bringing qualifying to an early conclusion.

As for Rosberg, he admits the mistake was unfortunate, but says it was still a great feeling to be on pole for the second year at Monte Carlo.

“No not [an ideal way to end qualifying.] I thought it was over – I thought the track would ramp up and someone else could beat my time. I’m happy it worked out. Pole at home is fantastic – it couldn’t be better,” said Rosberg.

“Of course I’m sorry for Lewis, I didn’t know where he was. Of course, yeah it’s not great.”

Race officials have launched an investigation into the incident to determine whether the mistake was genuine or not.

Given the lack of overtaking spots at Monaco, the start of the race will be extremely important in deciding the outcome, with Rosberg looking to win his second grand prix of the year.

Hamilton will be looking for his fifth straight win this season but will have to be aware who is behind him, with Red Bull’s Ricciardo qualifying in third.