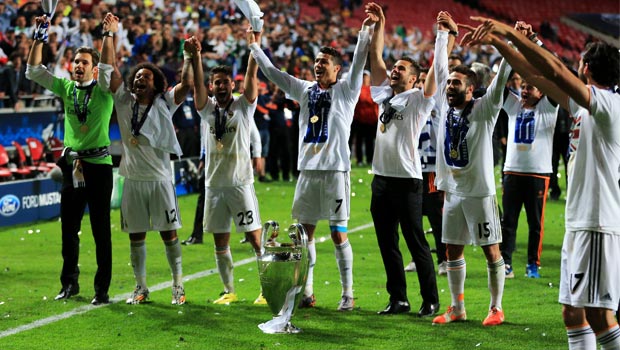 Cristiano Ronaldo insists that he ‘always believed’ Real Madrid would win the Champions League , despite coming within two minutes of losing to rivals Atletico Madrid.

Atletico broke the deadlock at the Estadio da Luz in Lisbon courtesy of a header from Diego Godin, who took advantage of some indecision from Real goalkeeper Iker Casillas.

However, in the second half it was Los Blancos who controlled the game and with Atleti dropping deeper and deeper with every passing minute eventually Real were able to equalise from the head of Sergio Ramos on
93 minutes.

That forced the game into extra time and Carlo Ancelotti’s men proved too strong for Los Rojiblancos, adding a further three goals to their tally with Gareth Bale, Marcelo and Cristiano Ronaldo all getting in on the act.

Ronaldo said: “It was an unbelievable night, to win La Decima [the club’s 10th European title] here in Portugal with a beautiful crowd.

“It’s something we’ve been wanting for many, many years and I’m really pleased and happy. I think the team deserved it because we played better than Atletico Madrid.

“I always believed, but we know that to score in 92 minutes is a lucky moment but when you force the game all the time and you believe, it’s always more easy.”

The Portugal international will now head off to link up with the national side ahead of the World Cup in Brazil full of confidence after admitting Saturday?s win in Lisbon was up there with the greatest achievement of his career.

He added: “Every year I try to do my best, I score goals and I help the team — but maybe because we won the Copa del Rey, we won the Champions League and I won the golden boot.

“Of course it’s a dream for me. I’m really proud to win it here [in Lisbon, where he started his career with Sporting]. We’ve worked all these years to win these kind of trophies so I’m happy with my team-mates and the fans – they deserve that.”