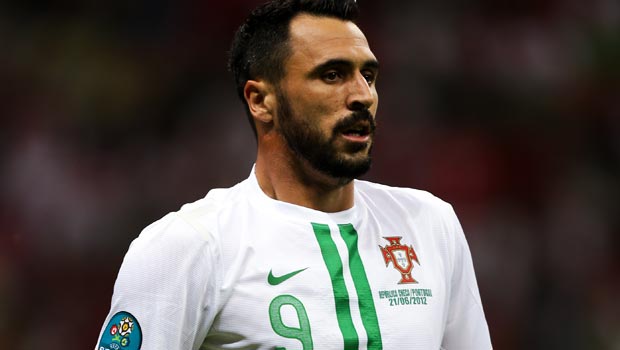 Portugal striker Hugo Almeida believes this summer’s World Cup could be one of the most competitive ever.

Speaking to FIFA.com, Almeida, who has 17 goals in 53 caps for his country, says it is impossible to pinpoint a favourite at this stage.

He said: “I wouldn’t say there is one. If I had to name one team, it would be Portugal of course. The teams who have won the World Cup in the past will certainly be trying to do so again – Brazil as hosts, Spain as defending champions. Germany have also come close in recent years and you mustn’t forget Italy.”

Having spent three seasons at Bundesliga outfit Werder Bremen before moving on to Turkey to join Besiktas in 2011, Almeida will be up against some familiar faces when Portugal’s campaign begins against Germany at Arena Fonte Nova in Salvador on June 16.

“Our record against them in recent tournaments is not that great. I hope we’ll do better this time,” Almeida said.

“It’s definitely an advantage that we’re playing Germany in our first game. If you have to play such a strong opponent at the end of the group stage, it’s much more difficult. For me, it’s special to be playing against Germany, because I still have many friends in Bremen who I haven’t seen for a long time and might be seeing in Brazil. But there are no friends during the game, of course. We have to fight and give everything in order to get our first points on the board.”

After the opening game against Germany, Portugal go on to play USA before rounding off the group stage with a game against Ghana.

Almeida is reticent when it comes to making bold predictions about his own side’s chances. In the outright betting, Portugal are marginally longer odds than England at 35.0

He said: “First of all, we want to get through the group stage. Anything can happen in the knockout rounds. We’re certainly not one of the favourites, but we’re not underdogs either. We have a good team, but we have to prove that on the pitch.”