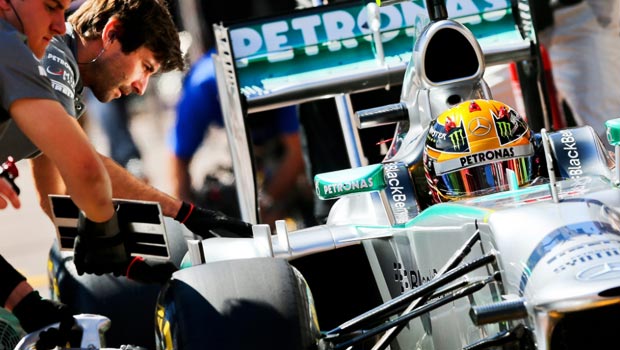 Lewis Hamilton admits his four-race winning streak could come to an end at this weekend’s Monaco Grand Prix as he expects a “tricky” Grand Prix.

The Monaco GP has been known throw up the odd surprises at one of Formula One’s most iconic circuits.

The famously tight street track has led to a wide range of winners in recent years with Fernando Alonso the last driver to pick up back-to-back victories seven years ago.

There have been 11 different winners in the principality since 2000, with Hamilton picking up his sole victory in 2008.

And if Monaco is usually unpredictable, race experts expect even more surprises on Sunday due to the new ‘tail happy’ cars, with Hamilton among them.

“Naturally when we go there, I’ve got to drive the same way I’m driving now: be cautious on power, otherwise it’s the same as every
year: as hard as you can, as fast as you can, using every little bit of road you can,” the Mercedes driver said.

“But of course big tank-slappers, you can’t have that at Monaco; last year, getting the power – the rear just planted and staying down – you didn’t have any oversteer moments. This year’s going to be tricky for everyone.”

Hamilton remains the 1.67 favourite to win in Monaco, ahead of 2013 winner and Mercedes team-mate Nico Rosberg at 2.70.

Rosberg expects a tougher race this year but admits he is relishing the added excitement.

“Yeah, it will be a little bit more of a challenge this year because we have less grip and traction than we had last year and harder tyres,” Rosberg said. “So it will be even more exciting but that’s all good.”