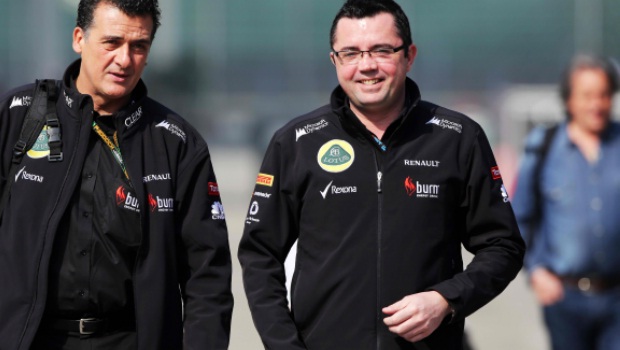 Lotus Team Principal Eric Boullier says the team’s line up for the 2014 season could be announced in the next ‘few days’.

Boullier has confirmed that Romain Grosjean has a deal in place for next season and they now just have to find a team-mate for him following the departure of Kimi Raikkonen.

The seat is one of the most sought after in Formula 1 and both Felipe Massa and Nico Hulkenberg have been heavily linked with the position.

Boullier is not giving the game away but has hinted a decision is imminent.

“Hopefully in a few days,” he said. “We only need one more driver. Romain has a contract for next year already and it is just a matter of confirmation.

“We are being prudent after last year, but I think he is on his way to big confidence.

“We are definitely pleased with his performances since Germany. Clearly something has switched on and he is working better – it is also true that the latest specification of tyres suits his driving style a little bit better than Kimi’s does – but yes we are pleased that he is stepping up.

“We don’t have a policy of number one and number two, but we needed him to step up.”

2012 GP2 Champion Davide Valsecchi, who is currently the team’s reserve driver, is also in contention but Boullier would prefer someone with more experience.

“Davide is on the list, but to bring a driver to the grid with no experience is a huge step for them,” he explained.

“I did it twice already with [Vitaly] Petrov and a semi-rookie Grosjean and I think I’ve had enough to be honest with you.

“Davide is on the list because he is a good driver and is GP2 Champion, but for sure you would favour a situation next year where you had a driver with experience.

“If you cannot find a driver with experience for the team, then the strategy would be to go for a rookie driver and he would be top of the list.”