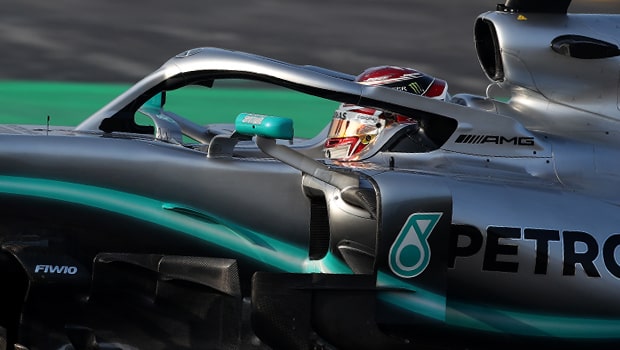 Lewis Hamilton says it is too early to call the Drivers’ Championship a straight duel between himself and Mercedes team-mate Valtteri Bottas.

Hamilton led Valtteri Bottas to the fifth consecutive Mercedes one-two at the start of this season after dominating the Spanish Grand Prix.

The Briton started second on the grid behind his team-mate, but gained the initiative into turn one and enjoyed a comfortable success thereafter, even when the safety car came out late in the race.

Red Bull’s Max Verstappen took third, holding off the Ferrari pair of Sebastian Vettel and Charles Leclerc, with the latter once more coming off second-best as their team deployed orders.

Hamilton, with three wins to the Finn’s two and a point for fastest lap from Spain to add to his tally, leads Bottas by seven points in the drivers’ standings.

Verstappen in third is already a massive 46 points behind, with Vettel a further two adrift, and Leclerc now ten behind him. While it looks like a two-horse race, Hamilton would prefer it be otherwise and says he isn’t viewing it that way in any case.

“The biggest threat is always the person that’s closest to you,” Hamilton told reporters. “And that person is Valtteri. “But it still feels too early [to talk about a title race].”

Vettel has pushed Hamilton all the way in the previous two seasons and the latter feels it is good for Formula 1 when more drivers are competing for honours.

“It’s not as much fun, for sure as when you’re competing against another team,” Hamilton explained. “That’s what Formula 1 is about.

“That’s the exciting part, when you arrive and you’re competing against one or two other teams who are also bringing their A-game. Naturally in those teams, that’s another two drivers.

“That puts another spanner in the works and often when the cars are close, there’s strengths and weaknesses of either team, and how you play those and benefit from those, it’s awesome.”